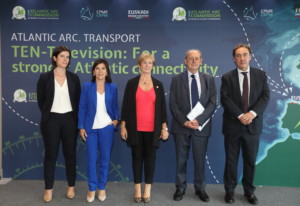 On Tuesday 10 September, the Atlantic Arc Commission (AAC) of the CPMR met with Prof. Carlo Secchi, Coordinator of the Atlantic Corridor, Ms Izaskun Bilbao Barandica, MEP and member of the Transport Committee at the European Parliament, and Arantxa Tapis, Basque Minister for Infrastructure and Economy, at the Port of Bilbao to discuss the revision of the Trans-European Transport Network (TEN-T) and to voice the position of the Atlantic Regions.

The Atlantic Arc Commission Transport Working Group led by the Basque Government and composed of political representatives of Atlantic regions, held a meeting at the Port of Bilbao to discuss the Atlantic proposals on the revision of the TEN-T policy.

Thanks to the participation of a high number of political representatives from all the Atlantic regions, but also the port authorities and industries, the seminar offered a comprehensive vision of Atlantic connectivity to European policy-makers.  Among the key messages raised were:

These messages reinforce those of the CPMR in its response to the European Commission’s public consultation on the revision of the TEN-T.

Professor Carlo Secchi, Coordinator of the Atlantic Corridor, European Commission, welcomed the organisation of the event, and promised to be in touch to continue learning about the needs and potential of the Atlantic regions.

Izaskun Bilbao Barandica MEP said: “The delays in the implementation of the Atlantic Corridor are slowing down the removal of bottle necks between Member States and the modernisation of the transport sector and thus its contribution to the fight against climate change.”

Arantxa Tapia, Basque Minister for Infrastructure and Economy reiterated the support of the Basque Government to the collaboration between regions to avoid the creation of new borders in a context of uncertainty due to a possible ‘no deal’ Brexit.

Negotiation of the budget of the CEF II (Connecting Europe Facility), Brexit, and the revision of the TEN-T policy will remain key dossiers of the Atlantic Arc Commission’s Transport working group in the coming months. If you want to stay up-to-date with the work of the AAC, please visit our website: https://cpmr-atlantic.org/