Final Conference of the ArcopolPlatform project 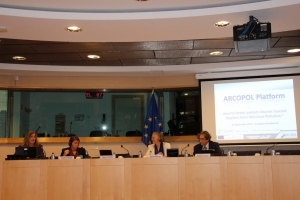 The Atlantic Arc Commission of the Conference of Peripheral Maritime Regions of Europe (CPMR) organised the final conference of the ARCOPOLplatform project on 14-15 September in the Committee of the Regions and in the European Parliament.

During the first day session, ARCOPOLplatform partners insisted on the need to raise awareness in the field of maritime pollution prevention and preparedness and to promote cooperation between the actors involved. The results of the project were presented to approximately 60 participants, including representatives of the European Commission, public authorities and stakeholders.

Even though the ARCOPOLplatform project has come to an end, it marks the beginning of a new step in the field of maritime pollution prevention in the Atlantic. In this framework, many tools developed within the projects will be disseminated and will be the basis for future actions.

On 15 September, participants were then invited to participate in a seminar organised in the European Parliament and entitled “How to better protect Atlantic Coastal Regions from Maritime Pollution?”.

This second event was organised in the framework of the Seas Rivers and Coastal Areas Intergroup (SEARICA) at the invitation of different MEPs, including the Chairman of the EP Fisheries Committee and Vice-President of the SEARICA intergroup in charge of the Atlantic, Alain Cadec, the President of the SEARICA Intergroup, Gesine Meissner, as well as Ricardo Serrão Santos and Cláudia Monteiro de Aguiar.

Among the participants, Marisa Fernandez, representing the ARCOPOLplatform project, and Sophie Bahé, representing VIGIPOL, presented their best experience and views on response to maritime pollution.

Delegates also discussed how to capitalise on the outcomes of the ARCOPOLplatform project in order to improve EU regulation in terms of response to maritime pollution and environmental liability.