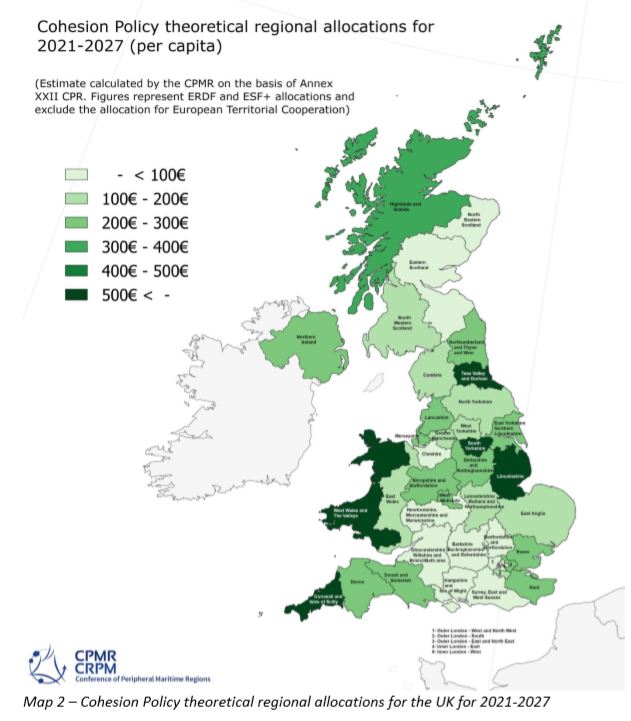 New analysis from the Conference of Peripheral Maritime Regions (CPMR) estimates that the United Kingdom would be entitled to approximately 13 billion euros of regional development funding for the 2021-2027 period should it stay in the European Union.

The CPMR has published a projection of the share of funding from the EU Cohesion policy for its member régions, including those within the UK.

This projection, based on the European Commission’s allocation methodology for the ERDF and ESF+ funds, shows that the UK regions and nations would be entitled to an increase of 22% for the 2021-2027 period, compared to the allocation of 10.6 billion euros for 2014-2020.

This increase can largely be explained by the fact many areas of the UK are falling behind the EU average in terms of regional prosperity.

According to the CPMR projection, Cornwall & the Isles of Scilly and West Wales & the Valleys, the two regions in the UK currently classed as ‘less developed regions’ under the European Commission’s eligibility rules, would still stand to receive a significant share of the UK allocation of Cohesion Policy.
In addition, the regions of South Yorkshire, Tees Valley & Durham and Lincolnshire would also become less developed regions for the 2021-2027 period. All five of these regions would stand to receive EU support in excess of 500 euros per capita for the seven-year period. 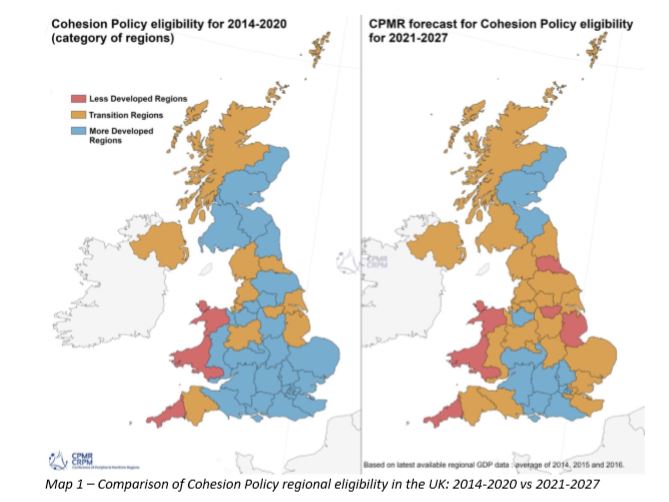 The CPMR projection also shows that regional disparities in the UK are increasing. There are significant differences in aid intensity (funds per capita) from Cohesion Policy from one area to another.

CPMR Secretary General, Eleni Marianou, said: “Our analysis provides clear evidence that Brexit would be disastrous for the regional development of UK regions. In CPMR we stand by our UK members and share their concerns on the persistent regional disparities that will be further aggravated.”