Brexit and Fisheries: The Atlantic Arc sets down principles for the forthcoming negotiations 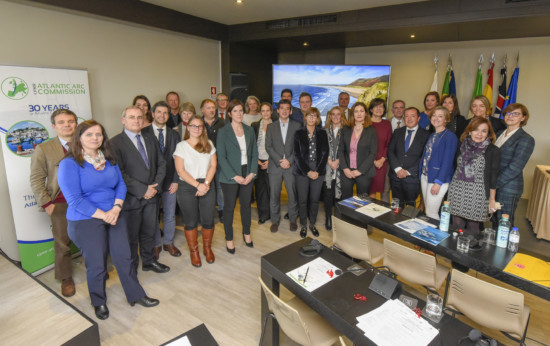 The General Assembly of the Atlantic Arc Commission, held in Porto on 14 November 2019, adopted a Political Declaration on Brexit and Fisheries, setting down key messages to negotiators ahead of a post-Brexit fisheries agreement between the EU and the UK.

The Declaration was approved by member regions from both the UK and the EU, thus representing the view of the whole Atlantic Arc Commission.  The Declaration called for the highest recognised standards for the preservation of natural ecosystems and sustainable fisheries economies, to the UK Government to provide clarity on the future direction of the international aspects of British fisheries policy, and for a flexible transition period, including flexibility from the European Institutions in a context of uncertainty.  The Atlantic Arc regions called on the UK government and the EU Institutions to closely involve the regions, devolved governments, and local authorities in the creation of mechanisms to support coastal communities to mitigate the impacts of Brexit.

Vanessa Charbonneau, Vice-President of the Pays de la Loire Region, who currently hold the Presidency of the Atlantic Arc Commission, and Rosa Quintana Carballo, Regional Minister for Maritime Issues of Galicia, led a debate on Brexit and Fisheries in which Atlantic regions confirmed these principles.

Rosa Quintana, Regional Minister for Maritime Affairs of the Government of Galicia, insisted: “The uncertainties that derive from Brexit are not only worrisome for fisheries activities, but also for regional supply chains and consumers, which depend on market stability and high sanitary standards.”

Vanessa Charbonneau, Vice-President of Pays de la Loire Region, added: “the fisheries sector faces increased social and economic challenges, in the context of immediate and long-term Brexit uncertainties, particularly in implementing the landing obligation. In this sense, we call for the development of sustainable and more flexible approaches within the Common Fisheries Policy to respond.”

These messages were expressed in front of an audience composed of representatives of the European Commission, the French and Portuguese States, as well as Atlantic regions and stakeholders.  Two other political statements were also agreed during the AAC General Assembly: the Norte Declaration 2019 and a Political Statement calling for an All Atlantic Skills Alliance.

This meeting was also the occasion to present the workplan for each AAC working groups and the three new Task Forces on the Atlantic Strategy, Exploring an Atlantic Macro-Region and Atlantic Third Country Cooperation.

The main outcomes of the AAC General Assembly can be viewed on the AAC website.